The Works of Thomas Traherne I - Inducements to Retirednes, A Sober View of Dr Twisses his Considerations, Seeds of Eternity or the Nature of 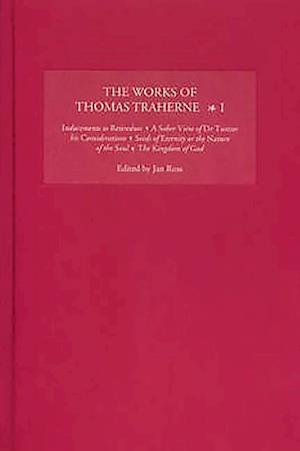 Thomas Traherne [1637?-1674], a clergyman of the Church of England during the Restoration, was little known until the early twentieth century, when his poetry and Centuries of Meditations were discovered. Although his reputation as a metaphysical poet in the tradition of Donne and Herbert has grown since then, there have only been miscellaneous publications of his poetry and devotional writings, with much of his output still unpublished. The Works of Thomas Traherne brings together all of Traherne's extant works in a definitive, printed edition for the first time, with the purpose of giving a sense of the manuscript or printed originals. His works not published in print will be edited by manuscript insofar as possible, giving due attention to their physical aspects and to their integrity as manuscript books. The text of Traherne's works will be printed in seven volumes, with an eighth volume of commentary, and a further volume of his notebooks. This first volume makes available in print four treatises contained in a single manuscript recently discovered in 1997 at Lambeth Palace Library. While they bear the stamp of Traherne's unique character of thought and writing, they are diverse in subject and form. Traherne wrote against a background of scepticism as well as a growing atheism. These four works show him to be profoundly aware of the currents of his age, theological, political, sociological and scientific, to which he responded with thoughtful and imaginative insights. They show him also to be a compelling apologist for the Christian religion and for the goodness of the church. This much needed and important edition of the works of Thomas Traherne makes a valuable contribution not only to Traherne studies but also to seventeenth-century studies in general.

Forfattere
Bibliotekernes beskrivelse First volume in what will be the definitive edition of the complete works of Thomas Traherne, containing previously unpublished material.