The Works of John Webster

indgår i serie The Works of John Webster, Volume 2 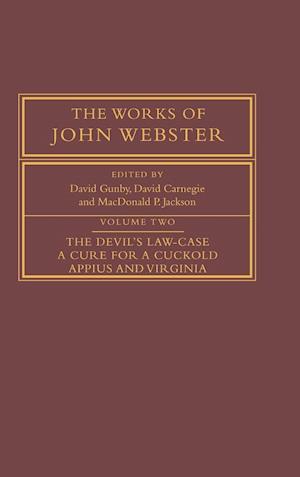 This is the second volume to appear in the Cambridge edition of the works of John Webster and includes The Devil's Law-Case, A Cure for a Cuckold and Appius and Virginia. This critical edition preserves the original spelling of all the plays; incorporates editorial scholarship, including valuable information on Webster's share in the collaborative plays; and employs alternative critical methods and textual theory. In particular, the edition integrates theatrical aspects of the plays with their bibliographical and literary features in a way not previously attempted in a scholarly edition of a Jacobean dramatist. The edition presents all of Webster's plays (with the exception of those collaborative plays already published in the Cambridge editions of Dekker, and Beaumont and Fletcher) and provides a brief biography, an account of Webster canon, illustrations, and critical and theatrical history of each play.