The Works of John Webster: Volume 3

indgår i serie The Works of John Webster 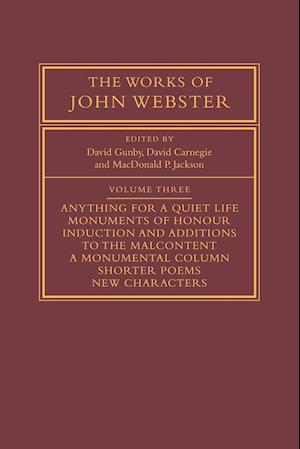 This is the third and final volume of the Cambridge edition of the works of John Webster. It contains the final complete play in the edition, the City comedy Anything for a Quiet Life, as well as Webster's spectacular Lord Mayor's pageant Monuments of Honour and his Induction and additions to John Marston's The Malcontent. Webster's non-dramatic work is also included: the deeply felt verse elegy to Prince Henry entitled A Monumental Column, his various shorter poems, including verses for the engraving of The Progeny of ... Prince James, and the thirty-two New Characters added to the sixth edition of Sir Thomas Overbury's Characters. This Cambridge critical edition preserves the original spelling of all the plays, poetry and prose, and incorporates the most recent editorial scholarship, including valuable information on Webster's share in the collaborative plays, and new critical methods and textual theory.