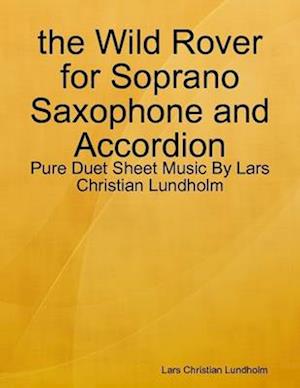 The Wild Rover is a popular folk song of unknown origins. Its been suggested that the song is in fact Scottish and not Irish as it is found in a collection of ballads dated between 1813 and 1838 held in the Bodleian Library. Often considered to be a drinking song it is a staple for artists performing live music in Irish pubs. Its been covered by a multitude of artist like for instance Andre Rieu, The Dubliners, Johnny Logan and The CorriesDuet Sheet Music for Soprano Saxophone accompanied by Accordion arranged by Lars Christian Lundholm. the Wild Rover is also known by alternative title: Nafarroa gure aberria. - Instrumentation: Soprano Saxophone and Accordion- Level: Easy- Score Type: Solo Score- Tempo: Fast- Genre: Folk Music- Composer: Anonymous- Year Composed: 1813- Pages (approximate): 4