- A History of Hollywood 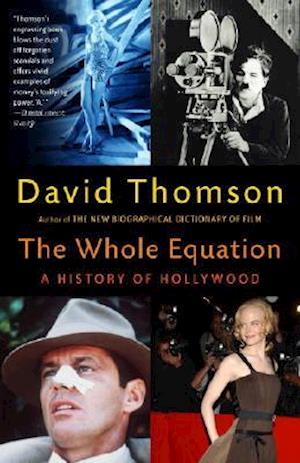 With the same style and insight he brought to his previous studies of American cinema, acclaimed critic David Thomson masterfully evokes the history of America's love affair with the movies and the tangled history of Hollywood in The Whole Equation. Thomson takes us from D.W. Griffith, Charlie Chaplin, and the first movies of mass appeal to Louis B. Mayer, who understood what movies meant to America-and reaped the profits. From Capra to Kidman and Hitchcock to Nicholson, Thomson examines the passion, vanity, calculation and gossip of Hollywood and the films it has given us. This one-volume history is a brilliant and illuminating overview of "the wonder in the dark"-and the staggering impact Hollywood and its films has had on American culture.

Forfattere
Bibliotekernes beskrivelse A magnificent history of Hollywood from the invention of film to the present day, by the everywhere acclaimed David Thomson, who has established himself as the "greatest living film critic and historian" "(The Atlantic Monthly), "irreplaceable" "(The "New York Times), and simply "the best writer about the movies" "(San Francisco Chronicle).
Now we have his master work, "The Whole Equation, which, in his own words, embraces "the murder and the majesty, the business statistics and millions of us being moved, the art and the awfulness." It accommodates "the artistic careers, the lives of the pirates, the ebb and flow if business, the sociological impact-in short, the wonder in the dark, the calculation in the offices, and the staggering impact on America of moving pictures. Which is also the thunderous artillery of America unleashed on the world."
Thomson tells us how D. W. Griffith and Charlie Chaplin created the first movies of mass appeal. He writes about Louis B. Mayer, who understood the whole equation and reaped the profits. He shows us how David O. Selznick exemplified the vanity and passion that gets memorable movies made; how the movies, offering a sense of common experience, helped Americans through the difficult years of the 1930s and '40s; how and why the quest for the blockbuster changed the industry.
He examines the films of Capra, Wilder, Hitchcock, Spielberg; of Gable, Cagney, Monroe, Crawford, Brando, Bogart, Nicholson, Kidman; of Irving Thalberg, Lew Wasserman, Harvey Weinstein-and scores more. He considers noir films, the blacklist, agents, method acting. He tells us the stories behind "The Godfather, Chinatown, and" Jaws. And he follows the money-a tripessential to understanding Hollywood at its most thrilling and most disappointing.
David Thomson has given us a one-volume history of Hollywood that is as well one of the most brilliant, most insightful, entertaining, and illuminating books ever written on American film.

"From the Hardcover edition.