indgår i serie The Cousins’ War 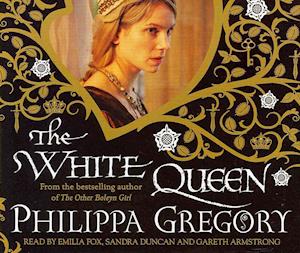 The first in a stunning new series, The Cousins War, is set amid the tumult and intrigue of The War of the Roses. Internationally bestselling author Philippa Gregory brings this family drama to colourful life through its women, beginning with the story of Elizabeth Woodville, the White Queen The White Queen tells the story of a common woman who ascends to royalty by virtue of her beauty, a woman who rises to the demands of her position and fights tenaciously for the success of her family, a woman whose two sons become the central figures in a mystery that has confounded historians for centuries: the Princes in the Tower whose fate remains unknown to this day. From her uniquely qualified perspective, Philippa Gregory explores the most famous unsolved mystery, informed by impeccable research and framed by her inimitable storytelling skills.