- From the advent of Christendom to the eve of Reformation

indgår i serie Architecture in Context 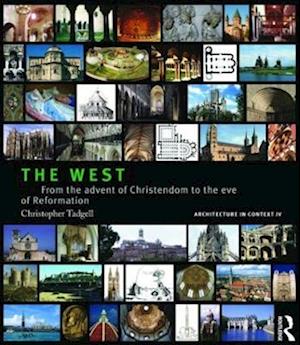 Christopher Tadgell covers the major architectural traditions of the Middle Ages, from the Romanesque architecture of the ninth and tenth centuries, built on the legacy of ancient Rome and including elements from Carolingian, Ottonian, Byzantine and northern European traditions, through to the evolution of the Gothic which heralded new, structurally daring architecture. The book ends with the Italian rediscovery of classical ideas and ideals and the emergence of the great Renaissance theorists and architects, including Brunelleschi, Alberti, and Bramante. As well as the palazzos, villas and churches of Renaissance Italy, this period saw the building of great chateaux in France, palaces in Germany and the golden-domed cathedrals of Russia.With more than two thousand images, including many plans, The West is a beautiful, single-volume guide to the history of architecture in this period, covering the whole of Europe from Ireland to Russia and placing architectural developments within their political, technological, artistic and intellectual contexts.

Forfattere
Bibliotekernes beskrivelse Part of "Architecture in Context" series, this book covers the major architectural traditions of European Architecture in the Middle Ages, from the destruction of Rome to the rediscovery of Classical values in 15th-century Italy. 800 Line drawings, black and white; 1000 Halftones, color