The Warren Buffett Philosophy of Investment: How a Combination of Value Investing and Smart Acquisitions Drives Extraordinary Success 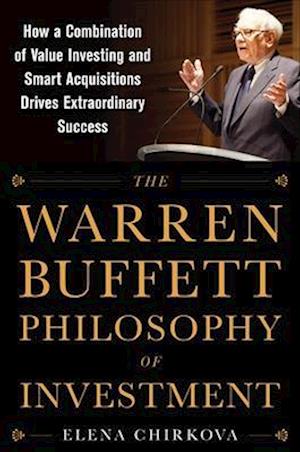 See the world's #1 investor like never before-and learn how you can replicate his successMany books have been written about Warren Buffett's value-investing strategy, and volumes more have been written about becoming a top-tier value investor. Even so, no one can touch the success Warren Buffett has achieved. Why? In this revealing examination of Buffett's success, practitioner, professor, and bestselling author lena Chirkova proposes the key to replicating his achievements is found in his acquisition practices as well as his investment strategy.In The Warren Buffett Philosophy of Investment, she looks at the man in full to piece together the framework leading to his unmatched wealth-generating prowess. The cornerstone of her study goes beyond investment theory to show Buffett's core wealth drivers are his philosophies behind Berkshire Hathaway. From his decision to create a joint stock company (instead of a mutual fund) to his hands-off policy with acquired companies to making himself a brand-name of mergers and acquisitions-she illustrates an intimate portrayal of Buffett operating behind the scenes by piecing together his career with scholarly diligence and scrutiny. Even well-read Buffett followers gain fresh insight into the man by discovering:Where his divergence from the principals of Ben Graham and Philip Fisher make him a superior investorWhy his unorthodox perspective on the financial markets keep him ahead of the curveHow his vision of risk, interpretation of volatility, and scepticism about investing in technology companies are interconnectedWhat he sees as the critical problems of corporate financeAdditionally, readers are treated to extraordinary coverage of how Buffett strategically set up Berkshire Hathaway to suit his personal long-term investment strategy and provide almost cost-free leverage. See how Buffett's singular acquisition tactics and portfolio investments earned Berkshire Hathaway the distinction as "the right home for the right people," which gives him access to deals unobtainable by other companies and investors.You're only investing with half a strategy until you take your value investing to the next level with The Warren Buffett Philosophy of Investment.

Forfattere
Bibliotekernes beskrivelse Many books have been written about Warren Buffett's value-investing strategy. Even so, no one can touch the success Warren Buffett has achieved. Why? In this revealing examination of Buffett's success, the author proposes the key to replicating his achievements is found in his acquisition practices as well as his investment strategy.