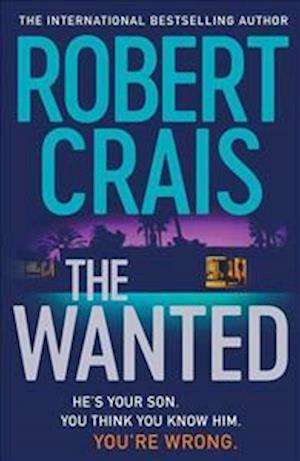 As addictive as Lee Child and as explosive as Michael Connelly - THE WANTED is the new thriller from Robert Crais, and a NEW YORK TIMES BESTSELLER 'I can't wait for the next Robert Crais!' Bill Clinton Seventeen-year-old Tyson is a normal teenaged boy - he's socially awkward, obsessed with video games, and always hungry. But his mother is worried that her sweet, nerdy son has started to change... and she's just found a $40,000 Rolex watch under his bed. Suddenly very frightened that Tyson has gotten involved in something illegal, his mother gets in touch with a private investigator named Elvis Cole and asks him to do some digging. Cole uncovers a connection between Tyson and eighteen unsolved burglaries in LA's ritziest neighbourhood. Tyson spooks and runs. And then people start dying... Robert Crais' books have been published in a staggering 62 countries and are bestsellers around the world. He began his career writing for classic crime and police shows like Hill Street Blues, Cagney & Lacey, Miami Vice and LA Law. He is a Grand Master of the Mystery Writers of America.* * * PRAISE for THE WANTED * * * 'Cleverly plotted, stylishly written... another rewarding page-turner by one of the most reliable storytellers in modern crime fiction' Washington Post 'Los Angeles ace Crais extends his streak of sharp, enjoyable thrillers' Kirkus 'Gripping... The Wanted is a relentless thriller... I found myself engrossed by two terrible - but remarkably compelling - villains... a welcome literary gift from a master of the craft' HuffPost `Taut... expertly crafted' Publishers Weekly'An absolute must read' Mystery Tribune* * * PRAISE for ROBERT CRAIS * * * 'In Crais, a new star has appeared on the priovate eye scene - a dazzling first novel'-Tony Hillerman on The Monkey's Raincoat 'Far and away the most satisfying private eye novel in years. Grab this one - it's a winner!'-Lawrence Block on The Monkey's Raincoat 'Taken is intense and fast-paced and reads like a big-budget Hollywood blockbuster!'-CNN 'A tale of one man's bare-knuckled search for redemption. Like the best L.A. noir writers, Crais nudges the mystery genre into higher gear, tackling grand themes in exceedingly personal ways through flawed heroes and hard-to-spot villains'- LA Times Book Review on The Two Minute Rule

Forfattere
Bibliotekernes beskrivelse The gripping new novel from the master of the intelligent action thriller and author of Suspect, Robert Crais.