The Voice of Science, British Scientists on the Lecture Circuit in Gilded Age America

- British Scientists on the Lecture Circuit in Gilded Age America

indgår i serie Sci Culture in the Nineteenth Century 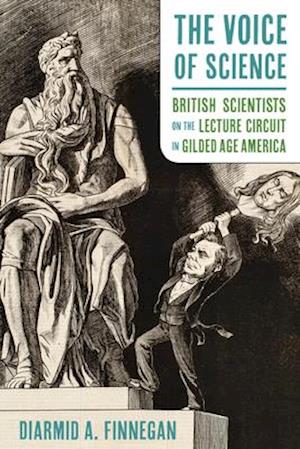 For many in the nineteenth century, the spoken word had a vivacity and power that exceeded other modes of communication. This conviction helped to sustain a diverse and dynamic lecture culture that provided a crucial vehicle for shaping and contesting cultural norms and beliefs. As science increasingly became part of public culture and debate, its spokespersons recognized the need to harness the presumed power of public speech to recommend the moral relevance of scientific ideas and attitudes. With this wider context in mind, The Voice of Science explores the efforts of five celebrity British Scientists-John Tyndall, Thomas Henry Huxley, Richard Proctor, Alfred Russel Wallace, and Henry Drummond-to articulate and embody a moral vision of the scientific life on American lecture platforms. These evangelists for science negotiated the fraught but intimate relationship between platform and newsprint culture and faced the demands of audiences searching for meaningful and memorable lecture performances. As Diarmid Finnegan reveals, all five attracted unrivalled attention, provoking responses in the press, on other platforms, and from church pulpits. Their lectures became potent cultural catalysts, provoking far-reaching debate on the consequences and relevance of scientific thought for reconstructing cultural meaning and moral purpose.