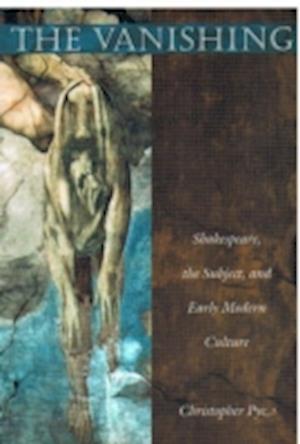 In The Vanishing Christopher Pye combines psychoanalytic and cultural theory to advance an innovative interpretation of Renaissance history and subjectivity. Locating the emergence of the modern subject in the era's transition from feudalism to a modern societal state, Pye supports his argument with interpretations of diverse cultural and literary phenomena, including Shakespeare's Hamlet and King Lear, witchcraft and demonism, anatomy theaters, and the paintings of Michelangelo. Pye explores the emergence of the early modern subject in terms of a range of subjectivizing mechanisms tied to the birth of a modern conception of history, one that is structured around a spatial and temporal horizon-a vanishing point. He also discusses the distinctly economic character of early modern subjectivity and how this, too, is implicated in our own modern modes of historical understanding. After explaining how the aims of New Historicist and Foucauldian approaches to the Renaissance are inseparably linked to such a historical conception, Pye demonstrates how the early modern subject can be understood in terms of a Lacanian and Zizekian account of the emerging social sphere. By focusing on the Renaissance as a period of remarkable artistic and cultural production, he is able to illustrate his points with discussions of a number of uniquely fascinating topics-for instance, how demonism was intimately related to a significant shift in law and symbolic order and how there existed at the time a "demonic" preoccupation with certain erotic dimensions of the emergent social subject.Highly sophisticated and elegantly crafted, The Vanishing will be of interest to students of Shakespeare and early modern culture, Renaissance visual art, and cultural and psychoanalytic theory.