The Unwritten Philosophy and Other Essays 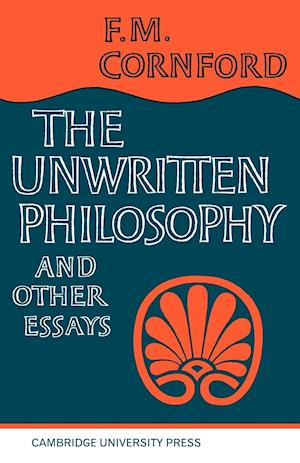 This is a 1950 collection of eight essays about Plato and the Presocratic philosophers who were F. M. Cornford's particular interest in the field of Greek thought. In the essay that gives the collection its title Cornford develops the two complementary themes which run through much of his writing: the effects of individual style and human character which must be reckoned with in reconstructing a philosopher's system from fragments or interpreting a complete philosophic work; and the influence of abstract schemes of conception which the philosopher assumes within his cultural tradition. These themes recur in essays discussing Pythagoras, Hesiod and Plato. Cornford's enthusiasm for his subject will communicate itself to any reader. In the memoir of Cornford which accompanies the essays Professor W. K. C. Guthrie describes the Hellenic qualities of Cornford's writing: 'the living symmetry of form, the grace and delicacy of the details, the humour, irony and occasional fantasy enlivening a fundamentally serious theme'.