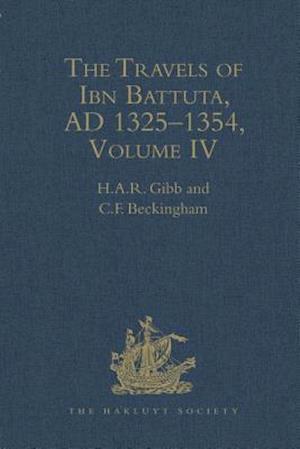 This volume completes the translation of Ibn Battuta's narrative. Volume III ended with Ibn Battuta's appointment by the Sultan of Delhi to accompany an embassy to China. In Volume IV he describes his journey to the coast where he embarked near Cambay and sailed to Calicut. Here the ships which were to take them to China were wrecked. Ibn Battuta joined the Sultan of Honavar in a temporarily successful attack on Goa, and then went to the Maldives, which had not long been converted to Islam by another North African. Here he functioned as a judge, married into the ruling elite, and became involved in a plot to bring the islands under the authority of a bloodthirsty Sultan in south India. On the way to join him, Ibn Battuta found himself in Ceylon and took the opportunity to climb Adam's Peak. He abandoned the planned invasion of the Maldives, to which he returned briefly, and the sailed to Bengal to visit an ascetic in Sylhet. He claims to have visited several countries in south-east Asia, including Sumatra and Java and some which cannot be satisfactorily identified, and arrived in China. After going to Canton he travelled by a non-existent river to Hang-chou and Beijing. His return to Morocco, during which he witnessed the ravages of the Black Death in Syria and Egypt, and called at Cagliari in a Catalan ship, is described summarily. He made two more journeys, the first to part of Spain still under Muslim rule, which included Gibraltar, Ronda, Malaga and Granada, and the other across the Sahara to the kingdom of Mali on the upper Niger, from which he returned to Fez via Timbuktu, Hoggar country and Tuat. Translated with revisions and new annotation from the Arabic text edited by C. Defremery and B.R. Sanguinetti. Continued from Second Series 141, with continuous pagination. The first two parts are Second Series 110 and 117. The index to all four parts is provided in Second Series 190. This is a new print-on-demand hardback edition of the volume first published in 1994.

Forfattere
Bibliotekernes beskrivelse This is an account of the travels of Ibn Battuta, the Arab geographer.