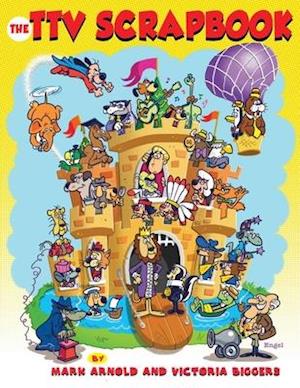 From the author of Created and Produced by Total TeleVision productions and the daughter of TTV co-founder Buck Biggers, comes this collection of memories, interviews, original arts and other "scraps". It's a full-color collection complete with information about the famed Macy's Thanksgiving Day Parade Underdog balloon by Bill Smith and a discussion with Gamma Animation's Harvey Siegel.

The front cover is by master cartoon artist Jim Engel (who also drew the cover for Arnold's Aaaaalllviiinnn!: The Story of Ross Bagdasarian, Sr., Liberty Records, Format Films and The Alvin Show), and a back cover by Matt Hansel, who has done work for American Mythology's Underdog comic book series.

Speaking of comic books, the TTV Scrapbook has over 80 pages of original art from the Charlton and Gold Key comic book series, and original storyboards from Underdog and Go Go Gophers, plus other rare and interesting artifacts from King Leonardo, Tennessee Tuxedo, The Beagles and more! There's even a display of Twinkles cereal box cover art.

Finally, there is an updated and complete TTV episode guide and an updated Who's Who of TTV, complete with numerous photos of each creator and original letters and memos from the time.

There is something fun for everyone!