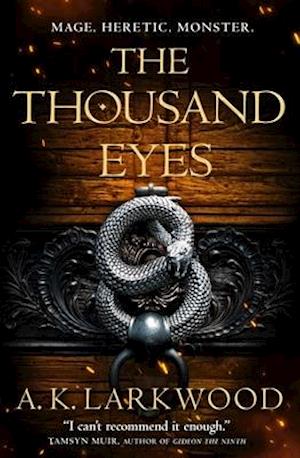 The sequel to A. K. Larkwood's stunning debut fantasy, The Unspoken Name, The Thousand Eyes continues The Serpent Gates series--perfect for fans of Jenn Lyons, Joe Abercrombie, and Ursula K. Le Guin. Two years ago, Csorwe and Shuthmili defied the wizard Belthandros Sethennai and stole his gauntlets. The gauntlets have made Shuthmili extraordinarily powerful, but they're beginning to take a sinister toll on her. She and Csorwe travel to a distant world to discover how to use the gauntlets safely, but when an old enemy arrives on the scene, Shuthmili finds herself torn between clinging to her humanity and embracing eldritch power. Meanwhile, Tal Charossa returns to Tlaanthothe to find that Sethennai has gone missing. As well as being a wizard of unimaginable power, Sethennai is Tal's old boss and former lover, and Tal wants nothing to do with him. When a magical catastrophe befalls the city, Tal tries to run rather than face his past, but soon learns that something even worse may lurk in the future. Throughout the worlds of the Echo Maze, fragments of an undead goddess begin to awaken, and not all confrontations can be put off forever...