The Tempo Implications of Bach's Notation: Part 1-The Proportional Method 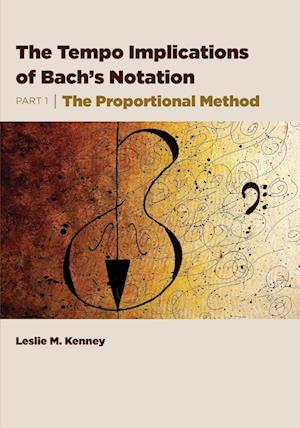 This research into the tempo implications of Bach's notation answers the age-old question of Bach's tempos, providing insight into Bach's intended musical effects.

Johann Sebastian Bach (1685-1750) was a very busy man. At times he composed a new church piece every week, often barely completing the piece a day or two before the church service. In order to ensure that his music lasted the appropriate amount of time, he needed to calculate duration while composing. To do so he needed to have specific tempos in mind.

A review of the contemporaneous performance practice literature indicates that, in this time period before the development of the metronome:

·       Establishing the correct tempo was considered an important and difficult task.

·       Once they established a tempo, they were able to vary that tempo by using proportions.

·       The time signature and the shortest note value of a piece both communicate information about tempo.

Through a comprehensive review of Bach's notation, this research demonstrates that there is one optimal way to explain the tempo implications of Bach's notation. It further shows that Bach used two different tactus speeds, and indicated a change in the speed of the tactus by using "mensural" time signatures, which are derived from the ancient music system of the same name.

After reading this book, the musician will be able to determine Bach's intended tempo for any Bach movement by identifying the time signature, tactus speed, and shortest note value. Bach's intended tempo gives valuable clues about his intended musical effect. Because Bach's tempo often differs from current performance practice, this research transforms our understanding of his music.

This book is for classical musicians, musicologists, music students, and anyone who appreciates Bach's music. While the research is important and significant, it is presented so that an amateur musician will be able to follow the arguments.