The Temple of Khonsu 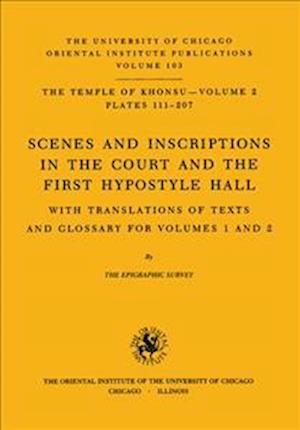 This volume completes the record of the forecourt and main hypostyle hall of the temple of Khons in Karnak, by the Chicago Epigraphic Survey. We now at last possess a full and accurate record of the works of Ramesses XI and Herihor there, plus a whole series of supplementary scenes and texts from the 21st Dynasty (Pinudjem I; Menkheperre), a text of Osorkon I, dedications by Nectanebo II, and texts and scenes of Ptolemy II, IV and IX, besides Alexander. Much of what appears here was earlier unpublished; what was known now appears in greatly enhanced form. ... The folio of plates is accompanied by a quarto booklet giving not only the list of plates and annotated translation of all texts, but also an informative preface by Dr. Kent Weeks, e.g., on the vicissitudes of royal and priestly features in the reliefs of Pinudjem I; he also indicates that this present volume (fruit of so many collaborators across the decades) was substantially the work of Dr. W. J. Murnane. A new and very welcome feature of the text-fascicle is its full glossary (in transliteration) of all texts in Vols. 1 and 2 of Khonsu. [From a review by K. A. Kitchen in Bibliotheca Orientalis 41 (1984) 84-85].