The Sword, the Word, and Books of Rules 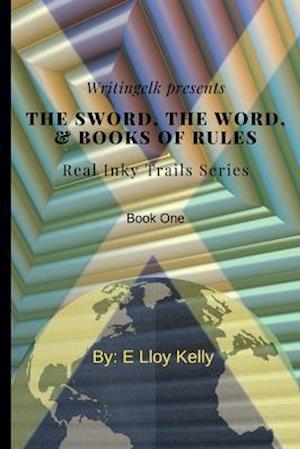 The sword, the word, and books of rules is a satirical socio-political drama with a liberal dusting of humor, wit, and a very funny dash of social commentary. Move along, nothing here to see, just a mocking motley fool. And some poetry It all started and happened in a fictitious Earth-like world called Kingsland, in a time period encompassing the sixteenth to the 23rd century. So now, the old man is looking on and seeing things, and hearing by way of his ever listening ear, and this is what he is about to hear. He would have been around for quite a long time, long enough to enable him to see all of the happenings. Now the task has fallen plumb onto him to do the records and to tell the stories. So, you want something unique and different? This is it. This is not your typical girl meets boy winning the joy character hopping plot wrapping sweetie flick bit. This is an analytical look at a book, bookings, and crooks. As well as some... Gods.Here's an excerpt: The discussion as it was to be remembered. Was highly geared at cruising speed, in the private chamber. Counting the words now, behind one pointy finger. Just the way he likes it to be sometimes, like, like this time -for instance. Wiseman was to be taking his in-stance, taking his preferred better win stance. "What, was, it, -tell me? What was that thing, which would have brought them here... pulling a puff on his smoking pipe now, before blowing smokes in the air and continuing on with the questioning song... in the first place?" Mr. Wiseman would have asked this, straight-faced. He was to come up with an answer before anyone else there proper. "A job " Was what Mister Wiseman heard. Turning the neck a quarter Bab, he was to lock faces up with the nerd. And Wiseman would have responded in sobs. Huh. Oh. Right, right you are Mister Anserley. Right you are. And what is that thing, which had kept them here for all of this time... pausing again to take other puffs on the source of his brown teeth grime. ...instead of returning em backside back home to the places from whence at the first they came? A job -they still have jobs -no Good high-paying jobs? No? You know Mister Anserley, they never did give you the respect properly, respect you so rightly deserve. You are quite brilliant lad. Brilliant indeed. Wow, take a nod, will you? Now, If Mister Anserley here is correct, and the records will show that he is, you bet. What then is that thing, that thing which is most likely to have them on the next shipping plane language, or training programs sandwich, anything, anything at all going, going out of here again? He would have pointed this question squarely at all of the rest of them there, and dearly. Ah, a job, I mean, not having a job? The answer was to come from the now backside of him since he was all the while a-turning, and seeking for some cohesive answering out of the rest of the other them, while he was speaking. Right, you are again, Anes. Facing up to the now red-faced Ainsworth always-answering Anserley. My dear Chap. It seems as if you are the only one around here who did bother to put on the cap, putting it upon the gap. You know The thinking kind of a cap. It did seem to us as if no one else, none of the other dimwit belts, none of them seemed to have wanted in on it, they just weren't getting in on the answering game bit. But then came the butting. Talking talks about nothing. But, but. Butted in the other natty nut. Yes Sir, yes Mister Nattoo Smart. But we, we, I mean, they, don't they have jobs? I mean. They do have jobs here, more jobs are here than there are people to fill them as a matter of fact. No? Yes, yes Mister Smartass, sorry, I meant to say, Mister Nattoo Smart, but things do change from time to time, don't they? Things do have a way of changing along the way, isn't it so mister Smart? And that is where we, you know, people like us, that is where we come in. We are who make changes to happen around here