- A Dictionary of Scoundrels 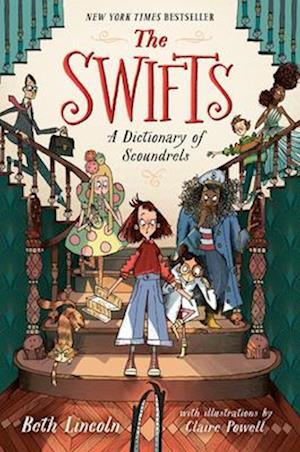 Shenanigan Swift is the definition of mischief. But when the Swift Family Reunion suddenly turns into a murder mystery, Shenanigan is determined to follow the clues and be the one to save her family. A celebration of words and individuality, The Swifts is a remarkable debut that is both brilliantly contemporary and instantly classic. shenanigan, noun

1. Tomfoolery, skulduggery, mischief of all varieties

2. A devious trick for an underhanded purpose On the day they are born, every Swift child is brought before the sacred Family Dictionary. They are given a name--and a definition. A definition everyone assumes they will grow up to match. The reunion is only a day away and Shenanigan, troublemaker and mischief enthusiast, has been rattling around the grand old Swift House, plotting future crimes and planning the hunt for Grand-Uncle Vile's long-lost treasure. She's excited to finally meet her rogue's gallery of relatives--until one of them gives Aunt Schadenfreude a deadly shove down the stairs. With some help from her sisters and their newly befriended cousin Erf, can Shenanigan catch the killer? And in a world where definitions are so important, how will she define herself?