The Struggle for Constitutional Justice in Post-Communist Europe 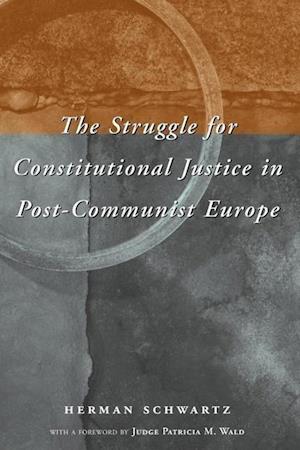 In the former Eastern Bloc countries, one of the most important, and most difficult, aspects of the transition to democracy has been the establishment of constitutional justice and the rule of law. Herman Schwartz's wide-ranging book is the first to chronicle and analyze the rise of constitutional courts in this changing region. Beginning with a brief history of the courts prior to 1989, Schwartz draws on his expertise as a constitutional scholar and long-time adviser to many of these countries to compare their jurisprudence with relevant American and West European law. He then focuses in detail on the relative success stories of Poland and Hungary, where the courts faced little opposition, and the more problematic situations in Russia, Slovakia and Bulgaria, where the courts' independence and very existence were threatened by both old-line communists and new-style authoritarians. With a wealth of historical and other information, backed up by a massive array of research, the book is a remarkably rich, yet accessible, source for anyone interested in the ongoing struggles of post-Communist Europe.

Forfattere
Bibliotekernes beskrivelse In the former Eastern Bloc countries, one aspect of the transition to democracy has been the establishment of constitutional justice and the rule of law. This text chronicles and analyzes the rise of constitutional courts in this changing region.