The Structure of Classical Diffeomorphism Groups 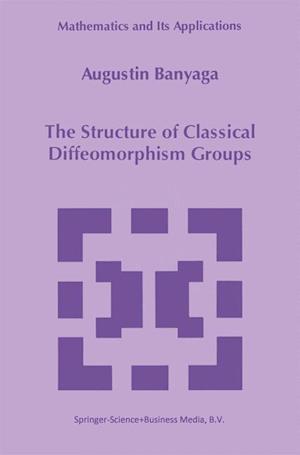 In the 60's, the work of Anderson, Chernavski, Kirby and Edwards showed that the group of homeomorphisms of a smooth manifold which are isotopic to the identity is a simple group. This led Smale to conjecture that the group Diff'" (M)o of cr diffeomorphisms, r ~ 1, of a smooth manifold M, with compact supports, and isotopic to the identity through compactly supported isotopies, is a simple group as well. In this monograph, we give a fairly detailed proof that DifF(M)o is a simple group. This theorem was proved by Herman in the case M is the torus rn in 1971, as a consequence of the Nash-Moser-Sergeraert implicit function theorem. Thurston showed in 1974 how Herman's result on rn implies the general theorem for any smooth manifold M. The key idea was to vision an isotopy in Diff'"(M) as a foliation on M x [0, 1]. In fact he discovered a deep connection between the local homology of the group of diffeomorphisms and the homology of the Haefliger classifying space for foliations. Thurston's paper [180] contains just a brief sketch of the proof. The details have been worked out by Mather [120], [124], [125], and the author [12]. This circle of ideas that we call the "Thurston tricks" is discussed in chapter 2. It explains how in certain groups of diffeomorphisms, perfectness leads to simplicity. In connection with these ideas, we discuss Epstein's theory [52], which we apply to contact diffeomorphisms in chapter 6.