The Strange Case of Eliza Doolittle 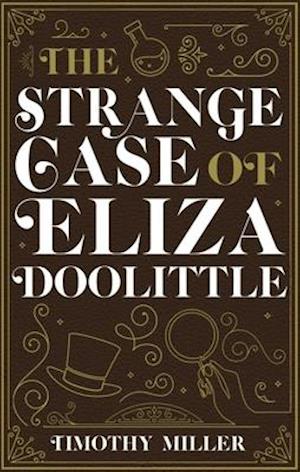 London is in flux. The clop of the hansom cab has given way to the madness of the motor car. And Sherlock Holmes, safe in the bee-loud glades of the Sussex Downs, is lured back to London when a problem is posed to him. Is the transformation of Eliza Doolittle from girl of the streets to Duchess more than it seems? Is it really the work of Henry Higgins or has the girl been traded for another and why? Posing as a rich American gangster Holmes infiltrates the Higgins household as a student. He meets Freddy, a seemingly innocuous suitor, but there are four other Freddys watching the house with their own plans for Eliza under the mysterious direction of Baron Von Stettin, attache to the Prince of Bavaria who is looking for a new bride. Holmes meets Dr. Edward Guest whose potions can turn Eliza from a spitfire to a kitten. And he comes into contact with the malevolent Ned Hyde who had been thought dead for twenty years. Watson scours the streets of London looking for anyone who knows the Eliza of old. He turns up Wiggins, the chief of the old Baker Street Irregulars, who has become a photographer and comes to Watson's aid by snapping a photo of Eliza. But even Eliza's father can't say for sure whether it is Eliza or not. In the meantime Hyde tries to gain access to Eliza who has the last of the antidote which will change him back from Hyde. But Hyde is turned away and the real Freddy is killed in the ensuing struggle and Hyde escapes. Holmes discovers the potion that Hyde is looking for and samples a drop. It turns him into a Hyde-like figure who nearly kills Watson. Realizing the danger, Holmes gets Eliza away and sets a trap for Hyde on the very day of Freddy's funeral. His discovery of Guest's transformation to Hyde shakes him to his core so that the world of Sherlock Holmes will never be the same again. The final chase begins -a mad dash to the docks where Eliza has fled. Holmes and Watson arrive just in time to see a ship moving away and Hyde working his way up the hawser with murder on his mind. The only way to stop him is for Watson to take the shot. Can he do it? Can he shoot a man in cold blood? Even a man like Hyde? With all the chips on the table everything comes down to one shot. But is that shot fired by Watson or by Von Stettin?