The Storyteller: A Highlander Novella 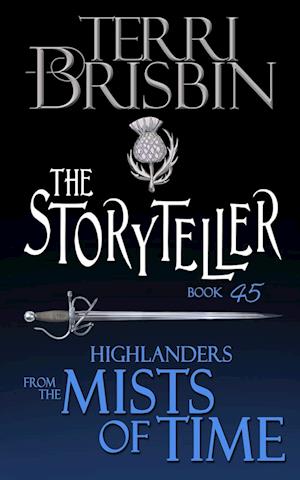 Struan Cameron has spent the last 270 years trapped between life and death on the battlefield of Culloden Moor. His role as the Storyteller has kept many of the other ghosts from going mad. But now, the powerful Muir witch has offered him the chance to see an end to his time on the moor and he plans to take it. He is given up to two days - back as a man of flesh and blood -- to perform some task for the witch that will earn him a chance for revenge or release. With the touch of her hand, the witch sends him. . . to Maine.

Fiona Masters has lost everyone important to her in a terrible accident that she believes was her fault. Mired in pain and grief, she decides she cannot live another day and plans to take her own life. With all the arrangements made and the gun in hand, she is stopped by a tall, handsome, sexy Scottish warrior who bellows at her in Gaelic! Believing she is caught up in her own personal 'A CHRISTMAS CAROL' and its ghosts of past, present and future, Fee allows this Highlander into her life, knowing there's nothing he can do to change her mind or make her want to live. . . Or can he?

Two strangers who have suffered similar loss and grief find that they do have some comfort to offer, but at the end of two days, will either of them be alive?

Struan Cameron has existed as a ghost for 270 years has a chance to win his release-if he performs a task for the powerful Muir witch. Accepting the offer, he finds himself stopping Fiona Masters from taking her own life. But, can this tall, sexy Highland ghost to stop her plan?