The Spoon of Doom 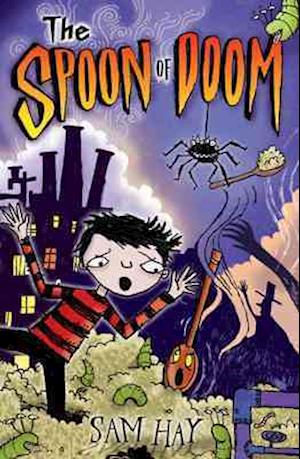 'It was never meant to feed the needy; but to serve up grief to the mean and greedy' The unfortunately named Albert Grub (A. Grub) has parents who are obsessed by mini-beasts; there are insects in the fridge, woodlice living in the hall and spiders dwelling in the cupboard under the stairs. But everything changes one day when Albert discovers that his dad is heir to the factory of the legendary Piddler's Porridge. Why is the town's noodle King, and owner of the adjacent factory so keen to get his hands on the Piddler's place? Is he after the legendary Spoon of Doom, believed to be hidden somewhere in the factory? And what can our reluctant hero do to stop him? A mix of quirky characters and outlandish goings on topped with lashings of bugs and porridge, this is a laugh-out-loud comic adventure that will appeal especially to boys.

Forfattere
Bibliotekernes beskrivelse Albert Grub has a dull life. But everything changes when Albert discovers that his dad is heir to the factory of the legendary Piddler's Porridge. Then, when he hears the legend of the Spoon of Doom, everything gets even more incredible. The spoon is hidden somewhere in the factory, but what will happen if it gets into the wrong hands? black and white