indgår i serie The Unexpurgated Adventures of Sherlock Holmes 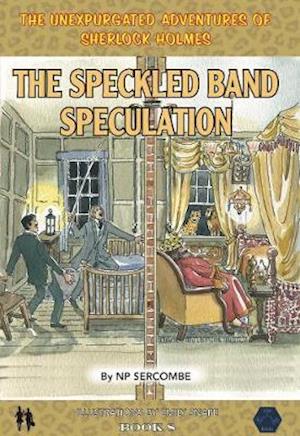 Dr. Watson was the chronicler of every Sherlock Holmes adventure published in The Strand magazine between 1887 and 1927. He reported them with honesty in the bluff, army-style of a military doctor, so frank in their account of human behaviour that they were too risque for the morals of Victorian England. George Newnes, the editor, purged each story before its publication. Newnes also replaced Watson's jocular illustrations with Sidney Paget's more innocuous portrayals. Newnes deleted everybody's backgrounds but in these accounts Watson reveals Holmes's family: his father, Professor Julian Cornelius Bortzoy Holmes; his wife, Wendy; his sister, Rachel, as well as Mycroft. Watson also exposes Mrs. Hudson's property empire and he tells us how Professor Moriarty became "the Napoleon of crime." Some of this new material is shocking, even by today's standards! Book 8 synopsis, the day after a gathering of Sherlock's family at 221B Baker Street in which Horatio - Sherlock's violin - makes its debut, Miss Sharon Stoner engages the great detective to find out why her sister, Sandra, died in suspicious circumstances two years previously. Now, she is in fear of her own life. Holmes and Watson accompany their terrified client to her family home in Leatherhead where they have to overcome an irascible stepfather, a baboon, a cheetah and something much more deadly!

Forfatter
Bibliotekernes beskrivelse These unexpurgated stories are new, exciting and funny - even Holmes's deerstalker has a story behind it. They are for lovers of Sherlock Holmes and a new audience who have experienced the great detective and the good Doctor at work, and, in this, at play.