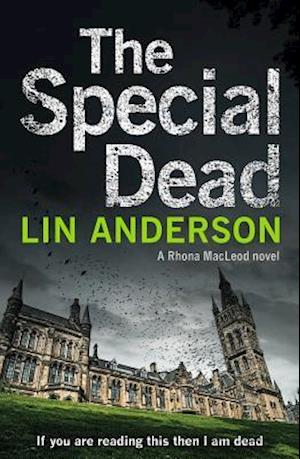 The Special Dead is the thrilling tenth book in Lin Anderson's forensic crime series featuring Rhona MacLeod.When Mark is invited back to Leila's flat and ordered to strip, he thinks he's about to have the experience of his life. Waking later he finds Leila gone from his side. Keen to leave, he opens the wrong door and finds he's entered a nightmare; behind the swaying Barbie dolls that hang from the ceiling is the body of the girl he just had sex with.Rhona MacLeod's forensic investigation of the scene reveals the red plaited silk cord used to hang Leila to be a cingulum, a Wiccan artefact used in sex magick. Sketches of sexual partners hidden in the dolls provide a link to nine powerful men, but who are they? As the investigation continues, it looks increasingly likely that other witches will be targeted too.Working the investigation is the newly demoted DS Michael McNab, who is keen to stay sober and redeem himself with Rhona, but an encounter with Leila's colleague and fellow Wiccan Freya Devine threatens his resolve. Soon McNab realizes Freya may hold the key to identifying the men linked to the dolls, but the Nine will do anything to keep their identities a secret.Follow Rhona MacLeod in more forensic thrillers with None but the Dead, Follow the Dead, Sins of the Dead and Time for the Dead.

Forfattere
Bibliotekernes beskrivelse If you are reading this, then I am dead. The Special Dead is a suspenseful forensic thriller, the tenth in the Rhona MacLeod series by Lin Anderson.