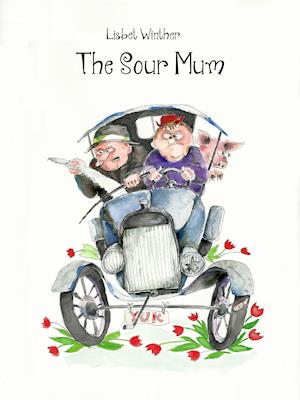 What would you do if your mum was the most sour mum in the world? Live with it or make a plan?

Part of the text:

The sour mum had an old car, in which she had taken the seats out, because it is not necessary for children to sit on seats, as long as they are tightened up with a rope. And then she could make room for everything else in the car, when she was going to town. 2 pigs, a giant dog, 8 boxes and a large carpet for example.

The boy and the girl sat at the bottom of the car on some raggy sacks, and and as long as they were tied tightly together, they could not fly out of the window, when the sour mum drove as fast as she could in the old rattling car. Beside her was a neighbour who played on a saw,

because the radio was broken. He was a sour and grumpy old man, but that’s another story.

In town the sour mum parked in front of a little red house, in the middle of a garden full of tulips.

Just then a very angry man came running out of the house, yelling and threatening with his stick.

“Get out of my garden!” He screamed, “All my tulips are completely ruined!”

The sour mum stuck her tongue out at the man.

“I’ll call the police!” the man shouted, and jumped up and down, WOW he was so angry.

“Go ahead,” the sour mum said, and went out of

the gate. The man shook his head, he was sure she was crazy. And the neighbour was sitting in the car, as he just had to play the saw, but he was a bit nervous now.

“What if the police turn up?” he thought.

The boy and the girl felt like telling the sour mum, to stop being so embarrassing and stupid.

“Let us go to Felicia Frocks, and look at some clothes before we go to the toy shop,” said the sour mum.

“Urgh,” said the boy. “Felicia Frocks is just the worst place in town. She screams so loudly, and the clothes she sells are very ugly. “