The Social Management of Genetic Engineering 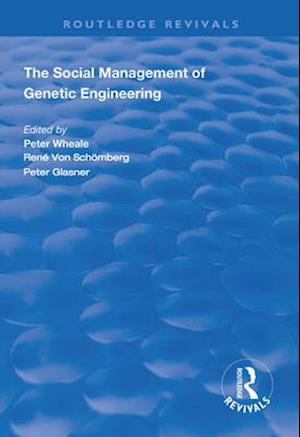 First published in 1998, this volume why and how genetic engineering has emerged as the technology most likely to change our lives, for better or worse, in the opening century of the third millennium. Over twenty international experts, including moral philosophers and social scientists, describe the issues and controversies surrounding modern biotechnology and genetic engineering. They explore ways in which lay individuals and groups can join in an effective and constructive dialogue with scientists and industrialists over the assessment, exploitation and safe management of these new and important technologies. Topics covered include a discussion of the issues surrounding 'Dolly', the cloned sheep, the politics and ethics of the international research programme to sequence the entire human genome, the ethical questions raised by the creation of transgenic farm animals, the morality of genetic experimentation on animals, the controversy surrounding the patenting of genetic material and of the transgenic animals themselves, the ethical implications of engineering animals for transplanting their organs into humans, and the environmental hazards of releasing genetically engineered organisms.