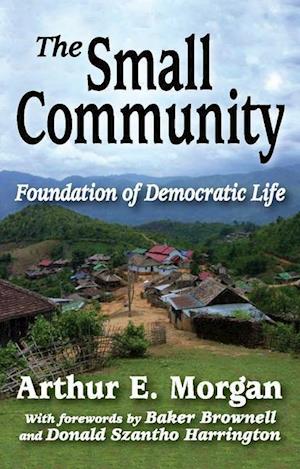 In this age of large cities, mass culture, and ever more massive events, people must struggle against an overwhelming crowd of their own creations to maintain human integrity. In this manual for human survival, Arthur E. Morgan offers a solution: peaceful existence in the small, primary community where, more easily than anywhere else, people can find a way to live well. Ultimately striving to show that the small community is "the lifeblood of civilization," this volume examines the political organization, membership, economics, health, and ethics characteristics of small communities.Like Rousseau before him, Morgan observes that we have less control over our affairs than in the past. In increasing our control of the natural environment, human beings have built a social environment so out of scale that it becomes nearly impossible for people to maintain balance. The struggle now is less with the natural order than with the social order, and preserving human integrity against the plethora of our own creations is the core problem.The need to rediscover elementary forms of human existence has been accelerated by the efficiencies of centralized control and mass persuasion. In the face of this, small communities or intimate groups become the primary pattern in which human beings must live if the good life is to be a realistic goal. The timely nature of this volume has grown as the electronic displaces the mechanical as a moral rival to human community.