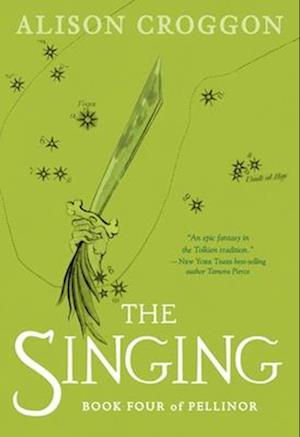 "Sonorous motifs and resonant archetypes form the backbone of this series conclusion... the] prose is aesthetically romantic without romanticizing anything; scars of sadness are shown unflinchingly, but when Maerad registers a celebratory evening at the end as 'rich and vivid and luminous with joy snatched back from the dark, ' she could be describing this series." -- KIRKUS REVIEWS (starred review) In an increasingly battle-ravaged land, Maerad, Cadvan, and Hem desperately search for one another as they make their separate journeys. The Black Army is advancing north, and even as Maerad faces a mighty confrontation with the Landrost to save Innail, all of the Seven Kingdoms are threatened with bitter and devastating defeat. Yet in Maerad and Hem lives the secret to the mysterious Singing, and legend holds that if they release the music of Elidhu together, they have the power to defeat the Nameless One. Can brother and sister find each other in time to fight this all-powerful enemy, and are they strong enough -- even reunited -- to defeat him before all is lost?