The Short End of the Sonnenallee 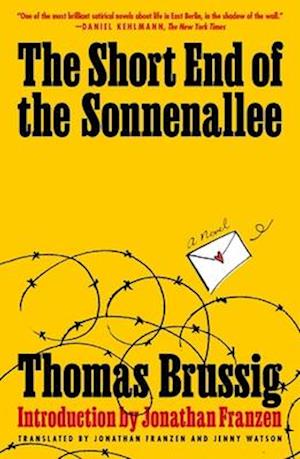 Thomas Brussig's classic German novel, The Short End of the Sonnenallee, now appearing for the first time in English, is a moving and miraculously comic story of life in East Berlin before the fall of the wall Young Micha Kuppisch lives on the nubbin of a street, the Sonnenallee, whose long end extends beyond the Berlin Wall outside his apartment building. Like his friends and family, who have their own quixotic dreams--to secure an original English pressing of Exile on Main St., to travel to Mongolia, to escape from East Germany by buying up cheap farmland and seceding from the country--Micha is desperate for one thing. It's not what his mother wants for him, which is to be an exemplary young Socialist and study in Moscow. What Micha wants is a love letter that may or may not have been meant for him, and may or may not have been written by the most beautiful girl on the Sonnenallee. Stolen by a gust of wind before he could open it, the letter now lies on the fortified "death strip" at the base of the wall, as tantalizingly close as the freedoms of the West and seemingly no more attainable. The Short End of the Sonnenallee, finally available to an American audience in a pitch-perfect translation by Jonathan Franzen and Jenny Watson, confounds the stereotypes of life in totalitarian East Germany. Brussig's novel is a funny, charming tale of adolescents being adolescents, a portrait of a surprisingly warm community enduring in the shadow of the Iron Curtain. As Franzen writes in his foreword, the book is "a reminder that, even when the public realm becomes a nightmare, people can still privately manage to preserve their humanity, and be silly, and forgive."