The Secret War Against the Arts 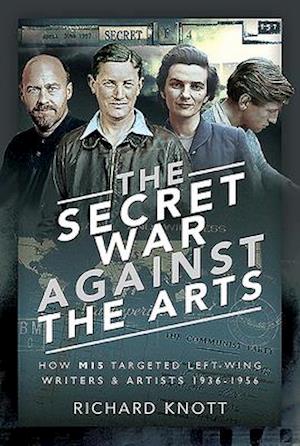 During the 1930s, the British Intelligence agencies became increasingly concerned about Communist influence in the country. They reacted by spying on thousands of ordinary British citizens. Amongst them were many artists and writers who, in tune with 'the spirit of the times', had become sympathetic to left-wing causes, most notably the Spanish Civil War. Telephones were bugged, post opened, homes searched and people encouraged to report suspicious behavior - all reminiscent of the East German Stasi.

This book has been written in the light of previously secret files, now available in The National Archives, which indicate the extent of the surveillance and the consequences for those being watched. It focuses on a significant number of writers and artists who were either members of the Communist Party of Great Britain or were suspected of being 'fellow travelers'. They include: George Orwell, Stephen Spender, Olivia Manning, Storm Jameson, W.H. Auden, Sylvia Townsend Warner, J.B. Priestley, Doris Lessing, Julian Trevelyan, Randall Swingler, Paul Hogarth, Clive Branson, and James Boswell.

The Secret War Against the Arts is a unique account of a dramatic period of modern history, from the outbreak of the Spanish Civil War to the Hungarian uprising in 1956, revealing how MI5 was systematic, unrelenting and uncompromising in its pursuit of artists and writers throughout the period, while failing to see the much more disturbing treachery of others - Anthony Blunt, Guy Burgess and Kim Philby, for example.