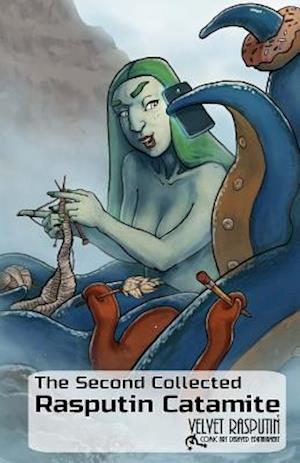 The juvenile delinquents of Rasputin Catamite are back in their slice-of-life slasher webcomic compilation. This time around, we meet Lechy's rock star crush as he tries to woo a jaded secretary away from an unappreciative client. What follows is an unlikely romance taking place during an illegal holiday known as Christmas, in a quiet country town where all is not as tranquil at is seems. Back in Irkutsk, Zoya gets a job as a sexy teenage barmaid, which inspires Dima's jealousy. Sasha finally finds someone who believes him. Lechy juggles a respectable school life, his roguish friends, and an existence full of agony with his legal guardian. Colorfully creepy characters such as a sadistic cult leader in a bunny suit, an adorable vampire hunter who never lets her prey go to waste, and a sassy tentacled shapeshifter inhabit the fringes of a collapsing Soviet Union, as dark secrets about to be revealed. This book compiles the following eComics: * Spilling Your Guts * Agony * The Delicious Pain Of Love