The Scope of Government 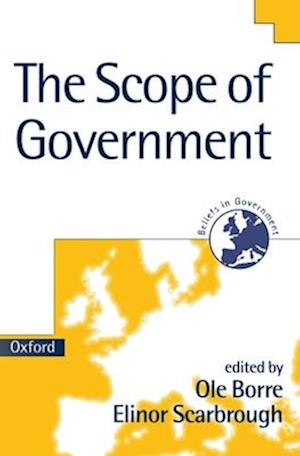 The arrival of the welfare state in Western Europe brought with it a vast expansion in the role of government. That expansion led to fears that the increased expectations of citizens would lead to government overload and `ungovernability'. This book sheds new and surprisingly light on the whole idea of a crisis of ungovernability.It begins by examining the expanding scope of government in the post-War period. Drawing on a vast data set stretching back over the last two decades and right across Europe, the book reveals public attitudes towards the range and extent of government activity. Changes in the public's political agenda are identified, along with attitudes towards the size of government, taxation, and the equality and security goals of the welfare state. Attitudes towards government intervention in the economy,the environment, and the media are also examined.The final chapters assess the significance for governments of beliefs about the scope of government. Series descriptionThis set of five volumes is an exhaustive study of beliefs in government in post-war Europe. Based upon an extensive collection of survey evidence, the results challenge widely argued theories of mass opinion, and much scholarly writing about citizen attitudes towards government and politics. The series arises from a research project sponsored by the European Science Foundation. Reviews of the series:`The quality of the empirical analysis is consistently high...[an] important collection of empirical studies addressing the debate about the "crisis of representation" in Europe.'Journal of Public Policy`These volumes contain the work of many of the most important scholars in the field of public opinion in Europe today...These five volumes represent a major contribution to comparative politics, especially the study of mass politics. The chapters provide a wealth of information about public opinion in contemporary Europe and the relationship between state and society...The volumes clearly will be read by all students of European politics...'Times Educational Supplement`The Beliefs in Government series is a monumental achievement. It tells us at least everything we want to know about the structure of European public opinion'.The Good Society