The School of the French Revolution

- A Documentary History of the College of Louis-le-Grand and its Director, Jean-Francois Champagne, 1762-1814 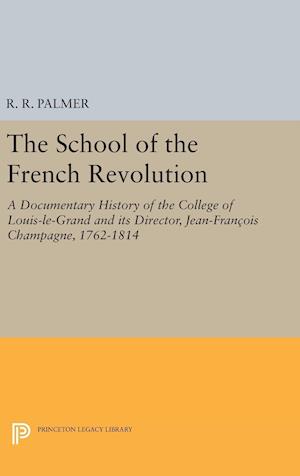 The College of Louis-le-Grand, now the premier lycee of France, is the only school with a connected history of education from the ancien regime to modern times. It was the only school never to close during the French Revolution, and its experience offers a new perspective on the fate of educational institutions in times of revolutionary change. In this book a noted historian describes the French college of the ancien regime and tells how it withstood crises of dissolution and reconstruction, dispersion of teachers and students, academic radicalism, loss of endowments, war, inflation, and political terror, to emerge in 1808 as a key element in Napoleon's Imperial University. R. R. Palmer's introduction illuminates the original documents, which are here translated for the first time. These documents supply valuable insight not only into the school's history, but also into the origins of the modern French educational system. From them emerges a portrait of the school's remarkable director, Jean-Francois Champagne, who guided his institution through the calamitous years of the Revolution. Originally published in 1975.The Princeton Legacy Library uses the latest print-on-demand technology to again make available previously out-of-print books from the distinguished backlist of Princeton University Press. These editions preserve the original texts of these important books while presenting them in durable paperback and hardcover editions. The goal of the Princeton Legacy Library is to vastly increase access to the rich scholarly heritage found in the thousands of books published by Princeton University Press since its founding in 1905.