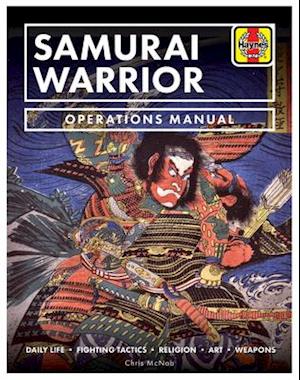 Emerging into history in the 8th century CE, the samurai evolved to become an aristocratic warrior elite that dominated Japanese warfare and society until the 1600s. They were renowned not only for their skills at arms, first with the bow then with the sword, but also for their adherence to strict martial and personal codes. As much as they were brutal, merciless, and skilled in battle, they were also defined by ritual, etiquette and education.Haynes' Samurai manual explains in detail every aspect of samurai experience, from their origins as imperial palace guards in the 8th century through to the peak of their influence in the 12th-16th centuries. Building on this history, the book works through the full spectrum of sam-urai life, their military training and battle skills, their aspirations to literacy and artistic sensibility; their relationships to women; the practice of seppuku (ritual suicide); and much more.

Forfattere
Bibliotekernes beskrivelse This book explains every aspect of the samurai life, from their role as imperial palace guards through to the peak of their power and influence. It includes detail on their military training and fighting techniques, their literacy and artistic sensibilities, attitudes to women, ritual suicide, and much more. 250 Illustrations, unspecified