The Saint Who Stole My Heart: Regency Rogues Book 4 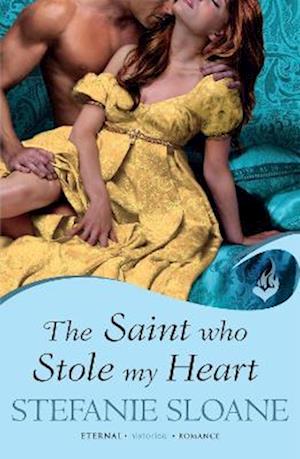 The fourth Regency Rogues novel of desire, danger, intrigue, and steamy seduction from acclaimed writer Stefanie Sloane. Perfect for fans of Sabrina Jeffries, Stephanie Laurens and Eloisa James.Possessed of a brilliant mind and a love for puzzles, Dashiell Matthews, Viscount Carrington, is a crucial member of the elite Young Corinthians spy league. Assuming the facade of an addle-brained Adonis, he hunts for a notorious London murderer known as the Bishop. When fate causes him to cross paths with Miss Elena Barnes, Dash discovers an enigma that will prove delightfully intoxicating to unravel: a voluptuous beauty as intelligent as she is fearless.Only the lure of a collection of rare books bequeathed to her family by Dash's late father could tempt Elena from her cozy rural life to the crush and vanity of London. But if Elena finds his lordship to be the most impossibly beautiful man she's ever seen, he also seems to be the stupidest. Which made her body's shameless response to his masterful seduction all the more unfathomable. Yet when she discovers Dash's mission to track the dangerous Bishop, she willingly risks everything - her trust, her heart, her very life - to join him.For more sweeping romance check out The Devil In Disguise, The Angel In My Arms, The Sinner Who Seduced Me, The Scoundrel Takes A Bride and The Wicked Widow Meets Her Match.