The Rise of the Amsterdam Market and Information Exchange

- Merchants, Commercial Expansion and Change in the Spatial Economy of the Low Countries, c.1550-1630 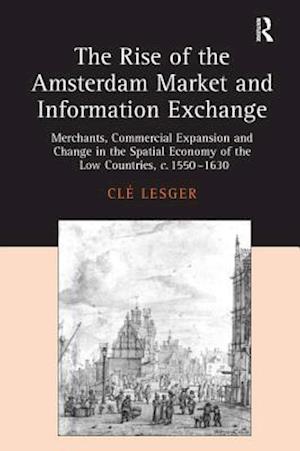 Most scholars agree that during the sixteenth century, the centre of European international trade shifted from Antwerp to Amsterdam, presaging the economic rise of the Dutch Republic in the following century. Traditionally this shift has been accepted as the natural consequence of a dynamic and progressive city, such as Amsterdam, taking advantage of expanding commercial opportunities at the expense of a more conservative rival hampered by outmoded medieval practices. Yet, whilst this theory is widely accepted, is it accurate? In this groundbreaking study, Cle Lesger argues that the shift of commercial power from Antwerp to Amsterdam was by no means inevitable, and that the highly specialized economy of the Low Countries was more than capable of adapting to the changing needs of international trade. It was only when the Dutch Revolt and military campaigns literally divided the Low Countries into separate states that the existing stable spatial economy and port system fell apart, and a restructuring was needed. Within this process of restructuring the port of Amsterdam acquired a function radically different to the one it had prior to the division of the Netherlands. Before the Revolt it had served as the northern outport in a gateway system centred on Antwerp, but with access of that port now denied to the new republic, Amsterdam developed as the main centre for Dutch shipping, trade and - crucially - the exchange of information. Drawing on a wide variety of neglected archival collections (including those of the Bank of Amsterdam), this study not only addresses specific historical questions concerning the commercial life of the Low Countries, but through the case study of Amsterdam, also explores wider issues of early modern European commercial trade and economic development.

Forfattere
Bibliotekernes beskrivelse During 16th century, the centre of European international trade shifted from Antwerp to Amsterdam, presaging the economic rise of the Dutch Republic in the following century. This study addresses specific historical questions concerning the commercial life of the Low Countries. It also explores issues of early modern European commercial trade.