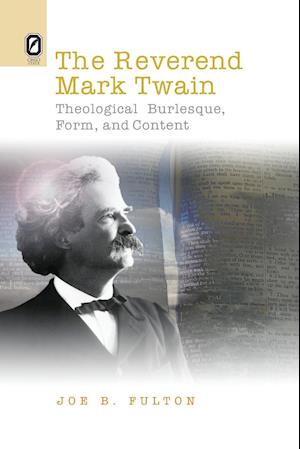 "I was made in His image," Mark Twain once said, "but have never been mistaken for Him." God may have made Mark Twain in His image, but Twain frequently remade himself by adopting divine personae as part of his literary burlesque. Readers were delighted, rather than fooled, when Twain adopted the image of religious vocation throughout his writing career: Theologian, Missionary, Priest, Preacher, Prophet, Saint, Brother Twain, Holy Samuel, the Bishop of New Jersey, and of course, the Reverend Mark Twain. Joe B. Fulton has not written a study of Samuel Langhorne Clemens's religious beliefs, but rather one about Twain's use of theological form and content in a number of his works-some well-known, others not so widely read.

Twain adopted such religious personae to burlesque the religious literary genres associated with those vocations. He wrote catechisms, prophecies, psalms, and creeds, all in the theological tradition, but with a comic twist. Twain even wrote a burlesque life of Christ that has the son of God sporting blue jeans and cowboy boots. With his distinctive comic genius, Twain entered the religious dialogue of his time, employing the genres of belief as his vehicle for criticizing church and society.

Twain's burlesques of religious form and content reveal a writer fully engaged with the religious ferment of his day. Works like The Innocents Abroad, Adventures of Huckleberry Finn, Personal Recollections of Joan of Arc, Roughing It, and What Is Man? are the productions of a writer skilled at adopting and adapting established literary and religious forms for his own purposes.  Twain is sometimes viewed as a haphazard writer, but in The Reverend Mark Twain, Fulton demonstrates how carefully Twain studied established literary and theological genres to entertain-and criticize-his society.