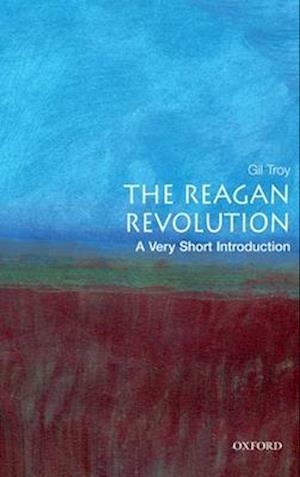 "They called it the Reagan revolution," Ronald Reagan noted in his Farewell Address. "Well, I'll accept that, but for me it always seemed more like the great rediscovery, a rediscovery of our values and our common sense." Nearly two decades after that 1989 speech, debate continues to rage over just how revolutionary those Reagan years were. The Reagan Revolution: A Very Short Introduction identifies and tackles some of the controversies and historical mysteries that continue to swirl around Reagan and his legacy, while providing an illuminating look at some of the era's defining personalities, ideas, and accomplishments. Gil Troy, a well-known historian who is a frequent commentator oncontemporary politics, sheds much light on the phenomenon known as the Reagan Revolution, situating the reception of Reagan's actions within the contemporary liberal and conservative political scene. While most conservatives refuse to countenance any criticism of their hero, an articulate minority laments that he didnot go far enough. And while some liberals continue to mourn just how far he went in changing America, others continue to mock him as a disengaged, do-nothing dunce. Nevertheless, as Troy shows, two and a half decades after Reagan's 1981 inauguration, his legacy continues to shape American politics, diplomacy, culture, and economics. Both Bill Clinton and George W. Bush modeled much of their presidential leadership styles on Reagan's example, while many of the debates of the '80s about thebudget, tax cutting, defense-spending, and American values still rage. Love him or hate him, Ronald Reagan remains the most influential president since Franklin D. Roosevelt, and one of the most controversial. This marvelous book places the Reagan Revolution in the broader context of postwar politics, highlighting the legacies of these years on subsequent presidents and on American life today.ABOUT THE SERIES: The Very Short Introductions series from Oxford University Press contains hundreds of titles in almost every subject area. These pocket-sized books are the perfect way to get ahead in a new subject quickly. Our expert authors combine facts, analysis, perspective, new ideas, and enthusiasm to make interesting and challenging topics highly readable.

Forfattere
Bibliotekernes beskrivelse This compact volume identifies and tackles some of the controversies and historical mysteries that continue to swirl around Reagan and his legacy, while providing an illuminating look at some of the era's defining personalities, ideas, and accomplishments. 10 maps & halftones