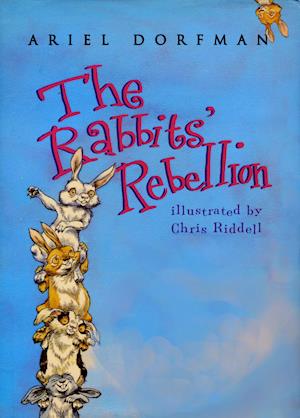 The story of a mean and narcissistic king, originally written in the 1970s is both uproariously funny and distressingly on point, will be enjoyed by children and their parents. "Rabbits don't exist."

So decrees the new king, the Wolf of all Wolves, after conquering the rabbits' homeland. He refuses to allow even one small, fluffy tail or long, soft ear into his kingdom. He orders the birds to broadcast this message far and wide. And he summons the old monkey to photograph him in his royal finery, performing his royal deeds. But in his darkroom, the monkey sees something strange developing in the photos. Is that a floppy ear? Whose grinning bunny teeth are those? How could it be?

Ariel Dorfman's first children's book, THE RABBITS" REBELLION, is a remarkable and mischievous allegory of truth and justice triumphing over political chicanery. Set in a magical animal kingdom and illustrated by the great Chris Riddell, this is a story that will have children roaring with laughter and parents raising an eyebrow with recognition.