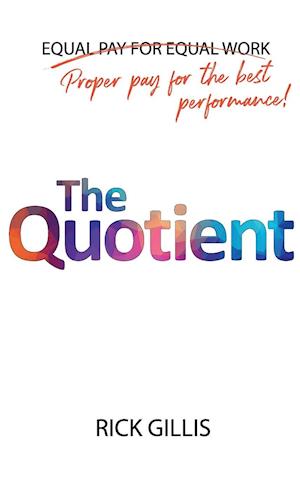 THE QUOTIENT. PROPER PAY FOR THE BEST WORK. ENHANCED ENGAGEMENT.

As Rick Gillis was nearing completion of the original draft for The Quotient (aka QTNT), he had an epiphany. For months he had been using the generally accepted phrase "Equal Pay for Equal Work" when talking about pay disparity. Then it struck him that based on everything he had written over the previous year; this was not correct. It was then he determined that for The Quotient to be more accurate, that statement should read: "Proper Pay for the Best Work."

If you think you are not being paid fairly, The Quotient offers you a direct and simple process to identify your achievements on the job, source your value to your employer and be able to defend your claims to management--at all levels. Similarly, your employer can easily see why what you say is accurate. The good news is that none of this is difficult

Book I of The Quotient focuses on teaching workers, project managers, and individual contractors how to determine and share their contributions with their employer regardless of their rank or position.

In Rick's experience he has been able to point out achievements his clients had not recognized simply because they were too close to the situation. To illustrate, fourteen "Q-Studies" have been placed throughout Book I to break down and explain the concepts and guide the reader through the process. These Q-Studies include an executive assistant who found thousands of dollars in uncollected discounts her company was not receiving; the construction superintendent who saved his company millions of dollars by building a simple bridge over the worksite getting his workers to the job more quickly, and the bank VP who 'saved his bank'--and never knew it--during one of our national financial melt-downs.

In each Q-Study you will see how these achievements were measured, valued and, ultimately, assigned a Quotient rating. The concepts behind The Quotient are effective and applicable at all levels of the organization.

Book II was written for management and is focused on:

-The potential for saving thousands and thousands of dollars when dealing with employment issues.

As Doug Thorpe, author of The Uncommon Commodity, writes in the introduction: "For two decades Rick Gillis has disrupted the traditional thinking about resumes and job search. People who followed Rick's guidance found quick and effective results even in the worst of job market conditions. Now, Rick blazes a new trail with The Quotient.

"In The Quotient, Rick shows the employee how to obtain the Proper Pay for the Best Performance. Note how much more important this idea is than just equal pay for equal work No matter the reason for the disparity, an employee who can identify and prove their value will always be worth more to an employer than another who is not as engaged.

"The benefit to employers is enhanced engagement; more accurately knowing who is actually performing to the benefit of the organization and, bonus, The Quotient offers an all new take on the performance appraisal management process,"

The Quotient (aka QTNT) will soon be the new normal.