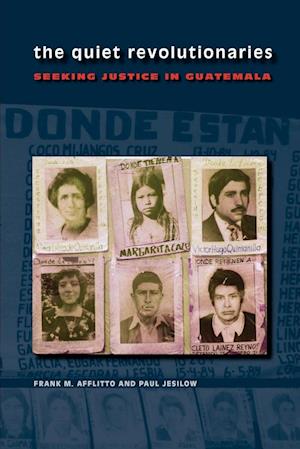 The last three decades of the twentieth century brought relentless waves of death squads, political kidnappings, and other traumas to the people of Guatemala. Many people fled the country to escape the violence. Yet, at the same moment, a popular movement for justice brought together unlikely bands of behind-the-scenes heroes, blurring ethnic, geographic, and even class lines.The Quiet Revolutionaries is drawn from interviews conducted by Frank Afflitto in the early 1990s with more than eighty survivors of the state-sanctioned violence. Gathered under frequently life-threatening circumstances, the observations and recollections of these inspiring men and women form a unique perspective on collective efforts to produce change in politics, law, and public consciousness. Examined from a variety of perspectives, from sociological to historical, their stories form a rich ethnography. While it is still too soon to tell whether stable, long-term democracy will prevail in Guatemala, the successes of these fascinating individuals provide a unique understanding of revolutionary resistance.

Forfattere
Bibliotekernes beskrivelse Presents an examination of those who survived Guatemala's civil war, and the mindset that helped them transform their society in the face of state-sanctioned terrorism. This book is drawn from interviews conducted in the early 1990s with more than eighty survivors of the state-sanctioned violence.