The Quest for Christian Unity, Peace, and Purity in Thomas Campbell's Declaration and Address 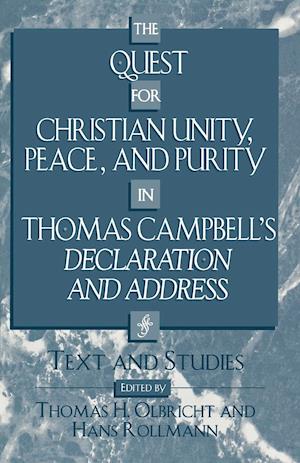 Composed in 1809 in order to organize and direct a loosely assembled network of Scots-Irish Presbyterians on the Western Pennsylvania frontier, the Declaration and Address of the Christian Association of Washington never quite achieved the immediate objectives that compelled its composition. Yet the document's lofty vision of a unified Christian Church, restored to the peace and purity that the New Testament had preached and promised, has for generations fueled the imagination and fired the commitment of millions of Christians worldwide-with, often, quite contradictory results. Emerging from the work of an international online seminar, this truly monumental volume presents a definitive text with critical apparatus for a landmark document in the history of American religion and worldwide Christian ecumenism, along with eighteen insightful, incisive studies of the document's historical provenance, its theological and ecclesiological significance, and its continuing influence.