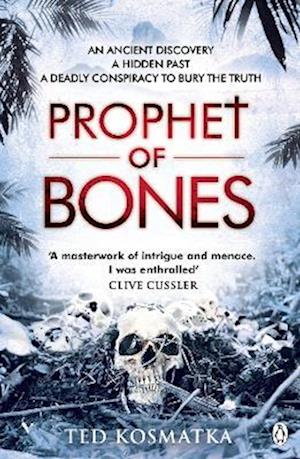 Prophet of Bones is a thrilling novel by Ted Kosmatka.An ancient discovery. A hidden past. A deadly conspiracy to bury the truth.He was told his was the only name on their list. But for brilliant young anthropologist Paul Carlsson, asked to examine the cache of bones found on as remote Indonesian jungle island, fascination soon turns to fear.Because waiting for him east of Java is evidence of something that shouldn't exist; a revelation that if made public will turn scientific and religious orthodoxy on its head. If Carlsson discovers the truth too many powerful interests have far too much to lose.But not every prophet is without honour. And Carlsson, alone and on the run, is determined to reveal the discovery to a world in which the church and science have conspired to hide it. A world which, it's been proven, is only 5,800 years old...Prophet of Bones is Ted Kosmata's enthralling second novel. The Games showcased Kosmata's imaginative genius and Prophet of Bones is no different. Fans of Robert Harris, Michael Crichton and Sam Bourne will be hooked. Praise for Ted Kosmata:'A masterwork of intrigue and menace. I was enthralled.' Clive Cussler'A hell of a storyteller ... one of those increasingly rare novels that immediately takes you on a journey into the world of the author's wondrous imagination ... truly hard to put down.This is what a novel is about.' Nelson DeMilleTed Kosmatka studied biology at Indiana University. He has worked as a zookeeper, steel mill worker, lab technician, and videogame writer for the extremely successful studio, Valve, publisher of mega-hits such as the Half-Life series and Portal. His work has been nominated for both the Nebula and Hugo awards and won the 2010 Asimov's Reader's Choice Award. He lives in the American Pacific North-west.www.tedkosmatka.com

Forfattere
Bibliotekernes beskrivelse He was told his was the only name on their list. But for brilliant young anthropologist Paul Carlsson, asked to examine the cache of bones found on as remote Indonesian jungle island, fascination soon turns to fear.