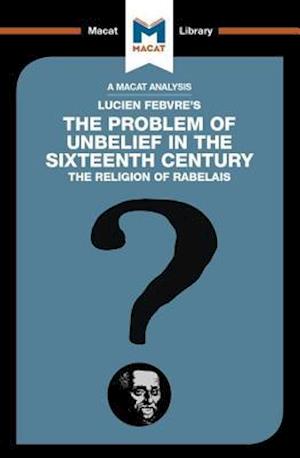 Febvre asked this core question in The Problem of Unbelief: "Could sixteenth-century people hold religious views that were not those of official, Church-sanctioned Christianity, or could they simply not believe at all?" The answer informed a wider debate on modern history, particularly modern French history. Did the religious attitudes of the Enlightenment and the twentieth century-notably secularism and atheism-first take root in the sixteenth century? Could the spirit of scientific and rational inquiry of the twentieth century have begun with the rejection of God and Christianity by men such as Rabelais, writing in his allegorical novel Gargantua and Pantagruel - the work most often cited as a proto-"atheist" text prior to Febvre's study? The debate hinged on some key differences of interpretation. Was Rabelais mocking the structures of the Christian Church (in which case he might be anticlerical)? Was he mocking the Bible scriptures or Church doctrines (in which case he might be anti-Christian)? Or was he mocking the very idea of God's existence (in which case he might be an atheist)?The other great contribution that Febvre made to the study of history can be found not so much in the fine detail of this work as in the additions that he made to the historian's toolkit. In this sense, Febvre was highly creative; indeed it can be argued that he ranks among the most creative of all historians. He sought to move the study of history itself beyond its traditional focus on documentary records, arguing instead that close analysis of language could open up a gateway into the ways in which people actually thought, and to their subconscious minds. This concept, the focus on "mentalities," is core to the hugely influential approach of the Annales group of historians, and it enabled a switch in the focus of much historical inquiry, away from the study of elites and their deeds and towards new forms of broader social history. Febvre also used techniques and models drawn from anthropology and sociology to create new ways of framing and answering questions, further extending the range of problems that could be addressed by historians. Working together with colleagues such as Marc Bloch, his understanding of what constituted evidence and of the meanings that could be attributed to it, radically redefined what history is - and what it should aspire to be.