The Privilege of Play

- A History of Hobby Games, Race, and Geek Culture 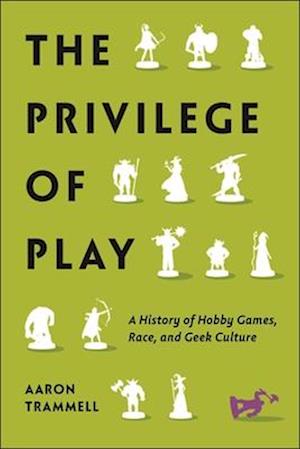 The story of white masculinity in geek culture through a history of hobby gamingGeek culture has never been more mainstream than it is now, with the ever-increasing popularity of events like Comic Con, transmedia franchising of the Marvel Cinematic Universe, market dominance of video and computer games, and the resurgence of board games such as Settlers of Catan and role-playing games like Dungeons & Dragons. Yet even while the comic book and hobby shops where the above are consumed today are seeing an influx of BIPOC gamers, they remain overwhelmingly white, male, and heterosexual. The Privilege of Play contends that in order to understand geek identity's exclusionary tendencies, we need to know the history of the overwhelmingly white communities of tabletop gaming hobbyists that preceded it. It begins by looking at how the privileged networks of model railroad hobbyists in the early twentieth century laid a cultural foundation for the scenes that would grow up around war games, role-playing games, and board games in the decades ahead. These early networks of hobbyists were able to thrive because of how their leisure interests and professional ambitions overlapped. Yet despite the personal and professional strides made by individuals in these networks, the networks themselves remained cloistered and homogeneous-the secret playgrounds of white men. Aaron Trammell catalogs how gaming clubs composed of lonely white men living in segregated suburbia in the sixties, seventies and eighties developed strong networks through hobbyist publications and eventually broke into the mainstream. He shows us how early hobbyists considered themselves outsiders, and how the denial of white male privilege they established continues to define the socio-technical space of geek culture today. By considering the historical role of hobbyists in the development of computer technology, game design, and popular media, The Privilege of Play charts a path toward understanding the deeply rooted structural obstacles that have stymied a more inclusive community. The Privilege of Play concludes by considering how digital technology has created the conditions for a new and more diverse generation of geeks to take center stage.