The Prester John of the Indies

- A True Relation of the Lands of the Prester John, being the narrative of the Portuguese Embassy to Ethiopia in 1520, written by Father Francisco Alvares Volume II (Volume II) 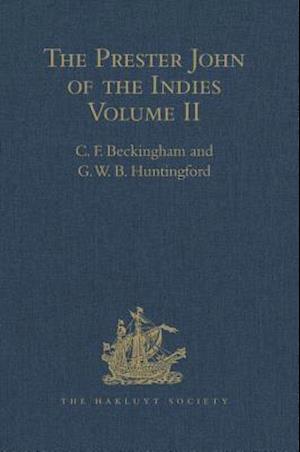 This is an account of the Portuguese mission which landed at Massawa on the west coast of the Red Sea in April 1520 and re-embarked 6 years later. It was the first European embassy known to have reached the Ethiopian court and returned safely from it. It was a small group of fourteen, among whom was the chronicler Alvares, who wrote the most detailed early account of the country, valuable for Ethiopian history and the history of the expansion of Europe. Alvares's account was translated into English for the Hakluyt Society by Lord Stanley in 1881. This revision makes use of sources since discovered, corrects certain errors, and modifies the style of the early version. There is an introduction, detailed annotation and a number of appendices. This is a new print-on-demand hardback edition of the volume first published in 1961.