The Preacher and the Politician 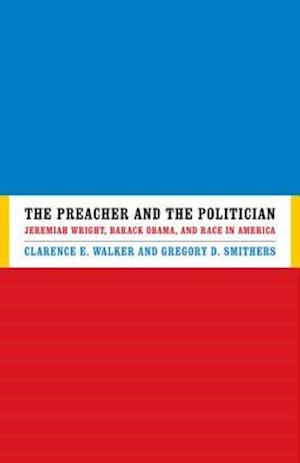 Barack Obama's inauguration as the first African American president of the United States has caused many commentators to conclude that America has entered a postracial age. The Preacher and the Politician argues otherwise, reminding us that, far from inevitable, Obama's nomination was nearly derailed by his relationship with Jeremiah Wright, the outspoken former pastor of Trinity United Church of Christ on the South Side of Chicago. The media storm surrounding Wright's sermons, the historians Clarence E. Walker and Gregory D. Smithers suggest, reveals that America's fraught racial past is very much with us, only slightly less obvious.

With meticulous research and insightful analysis, Walker and Smithers take us back to the Democratic primary season of 2008, viewing the controversy surrounding Wright in the context of enduring religious, political, and racial dynamics in American history. In the process they expose how the persistence of institutional racism, and racial stereotypes, became a significant hurdle for Obama in his quest for the presidency.

The authors situate Wright's preaching in African American religious traditions dating back to the eighteenth century, but they also place his sermons in a broader prophetic strain of Protestantism that transcends racial categories. This latter connection was consistently missed or ignored by pundits on the right and the left who sought to paint the story in simplistic, and racially defined, terms. Obama's connection with Wright gave rise to criticism that, according to Walker and Smithers, sits squarely in the American political tradition, where certain words are meant to incite racial fear, in the case of Obama with charges that the candidate was unpatriotic, a Marxist, a Black Nationalist, or a Muslim.

Once Obama became the Democratic nominee, the day of his election still saw ballot measures rejecting affirmative action and undermining the civil rights of other groups. The Preacher and the Politician is a concise and timely study that reminds us of the need to continue to confront the legacy of racism even as we celebrate advances in racial equality and opportunity.