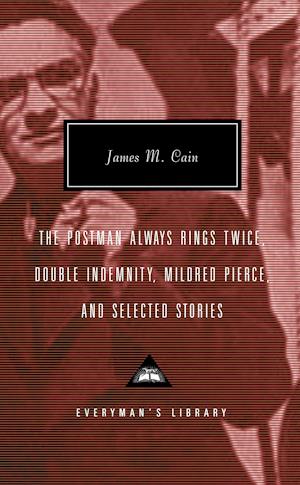 (Book Jacket Status: Jacketed)These three classics from the master of the noir novel, along with five otherwise unavailable short stories, are electric with the taut narrative voice, the suspense, and the explosive violence and eroticism that were James M. Cain's indelible hallmarks.The Postman Always Rings Twice, Cain's first novel-the subject of an obscenity trial in Boston, the inspiration for Camus's The Stranger-is the fever-pitched tale of a drifter who stumbles into a job, into an erotic obsession, and into a murder. Double Indemnity-which followed Postman so quickly, Cain's readers hardly had a chance to catch their breath-is a tersely narrated story of blind passion, duplicity, and, of course, murder. Mildred Pierce, a work of acute psychological observation and devastating emotional violence, is the tale of a woman with a taste for shiftless men and an unreasoned devotion to her monstrous daughter. All three novels were immortalized in classic Hollywood films. Also included here are five masterful stories-"Pastorale," "The Baby in the Icebox," "Dead Man," "Brush Fire," "The Girl in the Storm"-that have been out of print for decades.

Forfattere
Bibliotekernes beskrivelse This collection features three classics from the master of the noir novel--each of which was made into a classic Hollywood film--along with five otherwise unavailable short stories. Ribbon marker.